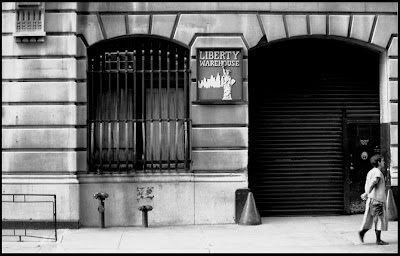 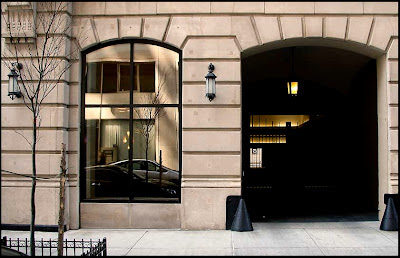 March 2008
I'm really not sure what attracted me to this building. After 23 years I have no idea if I was passing the handsome facade on West 64th Street, or if I was wandering around the plaza at Lincoln Center, a block and a half to the west, when I spotted its most striking feature.

That feature of the Liberty Warehouse, however, wasn't the solid stone facing, or its keystone arches. What made this century-old building unique was the 37-foot tall replica of the Statue of Liberty on the roof, eight stories above the ground. September 1985
William H. Flattau built the warehouse and had the statue crafted in Akron, Ohio, from where it traveled by flatbed railroad car to the west side of Manhattan in 1902. I passed the building in September of 1985 during an afternoon wandering the west side, shooting the Ansonia Hotel and the Dakota apartments.

She stood above west 64th street until 2002, when she was removed and stored behind the Brooklyn Museum where she underwent extensive restoration (including the removal of the lead-based paint covering it) and installed at the museum's rear entrance during the summer of 2006.

The warehouse itself was gutted, several stories were added to the building, and it reopened as residential condominiums. As we see in the 2008 photo, the loading bay now leads to a courtyard, new lanterns have been added and the standpipes relocated. The corner bumpers seem to be the originals, so perhaps vehicles still pass through the portal. 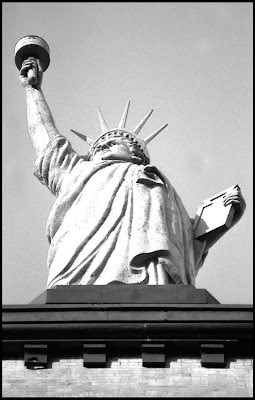 I tried my best to recreate newer picture of the statue, but was hampered by being so close to my subject. The first picture was made with a 200mm lens while I was standing on the sidewalk eighty feet or so below the statue; optical foreshortening in the telephoto lens compresses the image, giving it a chunky stature overall. For the second shot I had to lie on the ground with short zoom set at 22mm. I also had the disadvantage of the sun behind my subject, but I like the band of clouds.

For another current picture of this Liberty, and to see some other pictures from the Brooklyn Museum's urban sculpture garden, visit this page from the Talking Pictures site. 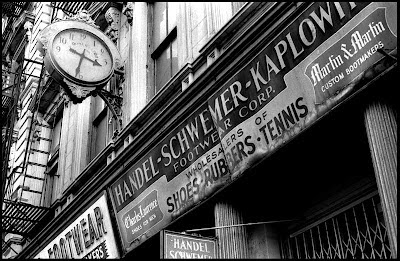 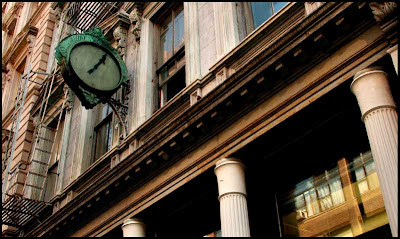 One of a row of cast iron buildings built in 1920 on the south side of Duane Street between West Broadway and Church, probably built as factories and gradually evolving into low-end offices and warehousing over the years. Businesses like these were on their way out in the mid 1980's as the importing and purchasing power of the then various -Mart's began their rise.

This original scene could almost look like it was taken not too many years after the building opened, rather than the 1980's, which was when it actually was made. And for 21 years I had no idea exactly where in Manhattan this picture was taken, as I had completely forgotten, and the rest of the roll didn't give me much of a clue. Because of the signs, I thought it may be in the garment district, but judging from the other pictures on the contact sheet from that same day, it might be below Canal, or somewhere on the west side, near Hudson and Leonard. I finally found the answer while wandering around the Forgotten New York website, on the page dedicated to street and wall clocks. Towards the end of the piece was mention of this location on Duane Street at West Broadway. (Click on the link above and scroll to the bottom.)

The merchant's signs are gone now, the footwear manufacturers and wholesalers have walked away, and these six-story cast-iron fronted buildings are all residential today. I didn't note this particular building's address, but looking through the NYC building department website I see that most neighboring buildings seem to be full-floor apartments, others appear to be half-floor. Alas, the clock, though showing a different time than before, is still only right twice a day. 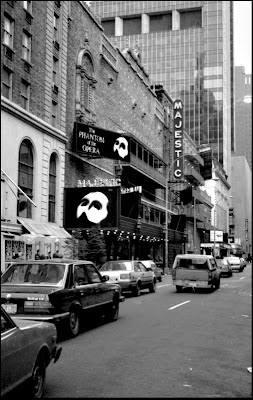 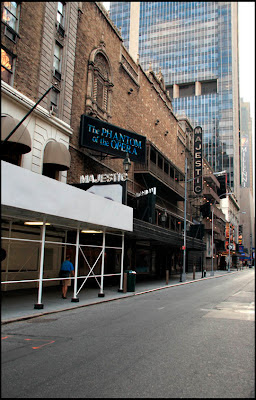