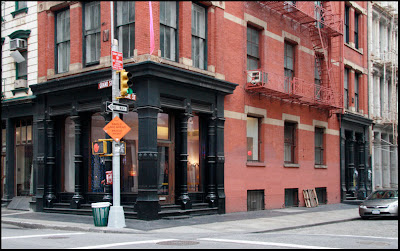 June 2007
I think of this scene as one where nothing has really changed, but actually everything has, and for the better. At least, for the better as long as you're not the one who has to pay the rents in this now-chic area.

Grand Street was a retail neighborhood in '88; a good place for home goods and furnishings at decent prices. Narrow sidewalks, with displays and wares spilling out of the storefronts, it, while not quite the mess that Canal Street has always been, has still never had the overall variety of goods that were to be found on Canal. (Rule of thumb: If you can't find it on Canal Street, it either doesn't exist, or, you probably didn't need it anyway.)

Grand is still a retail mecca, although the merchandise is a lot more upscale these days. It was good to see this corner in better shape now than the way it was 21 years ago, when the city couldn't seem to be bothered to even paint crosswalks on the pavement.

Today the streets have been repaved, and the sidewalks redone, the building's been painted, obliterating the graffiti, and the dumpster is gone. The trash bin has a liner now, but the streetlamp has only been repainted; and its street signs replaced with the NYC standard for historic districts, white on brown.
Posted by Neil J Murphy at 8/02/2007 06:21:00 PM