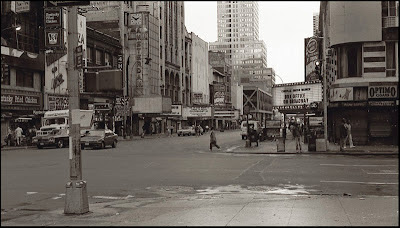 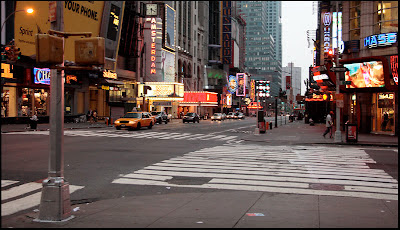 Off in the distance you can clearly make out the Port Authority bus terminal on Eighth Avenue, with its 'X' girders, so appropriate for this neighborhood, and beyond that the 1932 art deco McGraw-Hill building, once the tallest in the area. These landmarks are less distinct in the 2007 scene; the PA's steelwork is covered with neon, and the 33 floor McGraw-Hill was surpassed in '04 by the 60-story Orion building, a residential tower.
Posted by Neil J Murphy at 7/26/2007 06:40:00 AM

Back in 1988, people must have been crossing the street just any-which-way, even diagonally, I bet.
Can't have the tourists doing that.