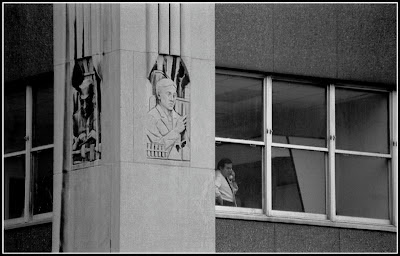 Other building upgrades from around the same time include new windows, which obviously don't include any unwitting posers early on Sunday mornings.
Posted by Neil J Murphy at 7/04/2007 10:28:00 AM

I like the painted bas-relief, too,
and I like the one left unpainted. It lets you have your cake and.
I also like the bold san-serif you're using for the text..Don't know what upainted-man's doing, but I think the key is in that object over his head that looks like a small barbell with the ends of the bar sharpened to a point. It looks SO familiar, but I can't place it.

I passed this building today and was interested in its history, which is how I came across these pictures online. I belive the painted image depicts someone involved in knitting.